THIS IS OUR VERSION OF THE AMERICAN DREAM!

Many of us grow up in or around the same city, develop childhood friendships, and ship off to college to discover who we are and what were made of, all the while developing life long relationships. As for Las Vegas, well we all know this town is a bit different. Due to its transient nature, childhood friends that stick around are by all means a rarity. As for college, I think most of us tried college, but with the casino industry at our fingertips, it’s a hard temptation to pass up. As for us five, Las Vegas and its casino industry is what brought us together! 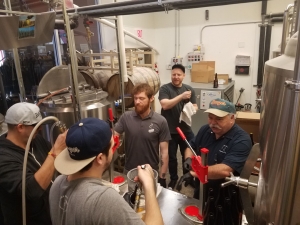 As teenagers we all wanted to get a good job and start out life off on the right foot. With this ambition in mind we all somehow wound up working together in the food and beverage industry at the Bellagio. This is where the story of Banger Brewing began. Five individuals developed a bond and a brotherhood that would eventually become the foundation of Banger Brewing. With the restaurant being the birthplace of our friendship, together we learned about the amazing world of food, spirits, and wine. We travelled across the world learning the craft of food, service, and hospitality to make our craft one to be followed and admired. As time passed, nearly 15 years now, we worked and played side by side, and eventually turned into a family. We have all journeyed in our own separate directions and chased our dreams on our own. As we grew older and wiser we realized that not only should we be united in friendship, but also in business. After all, what could be better than sharing your passions with your best friends?

With that in mind we made a conscious effort to join together by law and by finances, and undertake a business venture. We have always had a passion for beer and we knew our city was missing an element in the hospitality industry all-together, fresh great tasting, local beer. This is when Banger Brewing was officially created. With that in mind we decided to consult a very close buddy of ours, Michael “Banger” Beaman, who had been home brewing some pretty awesome beers for the last few years. Not only would he become our brew master, but also our name is derived from his nickname, as he is the gentleman who introduced us to craft beer. 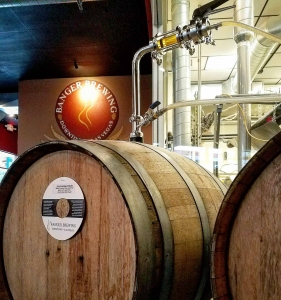 Banger came on board and became a partner with our company. Together we all dove in and rapidly increased our skills and abilities in the field of brewing. As time passed, brewing took over our lives. The kitchen was a lab, the fridge a cold storage, and the garage a full-blown one-barrel system. Vacations were designed around beer, checking out every brewery in the southwest that caught our eye. Not only did we want to see our competition, but we also wanted to see our new beer family! It is our dream to extend this passion and this family to Las Vegas. Our vision is to create a craft beer to shadow our craft of hospitality. We want to create fresh craft beer, made in the Las Vegas, for the city of Las Vegas. Fresh ingredients and a love for our city are the two main components of our company. Our beer is a reflection of our city: sexy, classy, and one of a kind. We want to bring the art of craft brewing to the city that has crafted five individuals. Banger Brewing Company was created by the city of Las Vegas, for the city of Las Vegas. Our city consumes more alcohol per capita then anywhere else in the world. With that being said it is time to put Las Vegas on the map in the craft beer world. It is our hope that you join us and support us in our vision, and become part of our dream to revolutionize the beer industry!